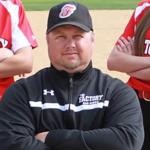 Coach A.J. is a native of Imperial, Nebraska. He attended and played baseball at Garden City CC and then The University of Nebraska-Omaha. He played middle infield and 3B. After college, A.J. played on a nationally competitive men's slowpitch team called T's 13 out of Omaha. T's has had several high finishes in "AA" and "A" national tournaments including winning the '97 NSA "A" World Series and 2001 ASA "A" Nationals. He also played on the state championship teams from '91 to '98. Personal highlights including leading the team in hitting at the '95 ASA nationals in Jacksonville, Florida at .823 and hitting a walk-off home run to win the state championship in 1996. AJ has been coaching youth baseball and softball for several years and loves to teach the fundamentals of playing ball. He has recently accepted the job as assistant coach under Stef Ewing at Cal State San Marcos in addition to running The Factory.

A.J. is the founder of The Factory Softball Club. Wife is Tracy and daughter is Lauren.

Coach Brent attended Allen Hancock JC where he was the quarterback for the Bulldogs.  He then transferred to SDSU where he graduated with a B.A. degree in Public Administration with a minor in City Planning.  His love for the water and goal to become an entrepreneur pushed him to start OEX Kayak & SUP in 1995 and currently has three shops in Southern California.

Coach Brent has two daughters and started coaching in 2010 in ASA/USA softball where he continues to coach and is also a current board member in charge of coach development.  He has coached regular season teams along with all-stars in all divisions.  In 2017 his team earned a berth in the Western National Class B Championships.  The team did not take the title but Coach Brent did win the coach’s dance contest!   Brent is going into his 4th season as assistant coach at University City High School.  With the Factory, he has coached at the 14U division and is currently coaching a team in the 16U division.

Coach Brent’s goals for softball players include appreciating the time they spend in their softball careers and building “Life Lessons” for the future.

Coach Brent is Safesport certified, NFHS certified, and USA ACE Level IV certified. He is an NFCA member and has participated in numerous ASA/USA conventions and coaching clinics.